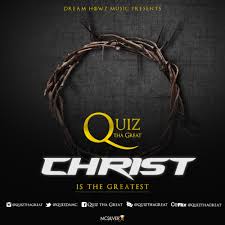 Christ Is The Greatest

No other way is right
The only way to the Father is Jesus Christ
He is the way, the truth, the life
With Christ in your life there’s nothing like Nepa just took the light huh!

Yeah…Listen
He wore the crown of thorns and raised me from the slums
Took strokes of cane His flesh was peeling off
Whipped so hard His blood was spilling off
Carried a big cross for the whole wide world …damn!

I am Beeyouteafull, I luh God and of course I love music. I'm a microbiologist by profession and the last born by biology.......... I am EWAOLUWA More by I-solo
Tags
0

Thank you for sharing. Show us some love by joining our community.
Follow @gospellyricsng